Apps have become a part of our everyday life. In healthcare, they became a solution for several problems arising in the industry. That is why we can categorize them according to their health purpose. Generally, we can define this technology as any application program that offers health-related services. From there, we can distinguish between the different wellness and healthcare apps, such as:

The Benefits of Mobile Health Apps

As of 2021, the app market for the healthcare industry is worth around $50 billion, with expected growth to almost $150 billion by 2028. The market grew by 14% during 2020 due to COVID-19 and people’s desire to take a more active role in their health delivery. Current numbers show that the industry will experience a 14% growth, year after year, for the next five years.

mHealth apps have seen a massive surge in use in the post-pandemic world, much like the rest of the telehealth technology. People require safe ways of reaching their care practitioners, and digital solutions offer just that: from chronic care management to the management of mental illnesses: we’ve only just begun to scratch the surface of this technology’s potential. The following statistics show that consumers know this: consumer adoption has increased from 11% in 2019 to a 46% acceptance rate by May 2021.

But the patients aren’t the only ones who utilize healthcare mobile apps. Accenture found that only 2% of patients in the largest U.S. hospitals use hospital-provided apps. This is staggeringly low, especially considering that, out of the 100 largest hospitals in the U.S., 66% offer their patients apps that aim to help with their condition. In that group, 33% have developed their proprietary apps. While this might seem like a logical step in the increasingly technology-reliant world, the fact remains that only 11% of mobile healthcare apps offered by these health systems provide what the patients want: access to EHRs, the ability to manage their appointments, and the ability to request prescription refills.

These technologies are widespread, although we can notice significant differences in use across population groups. As of February 2022, over 350 000 apps are available, and they are frequently used by older adults (aged 50-80). 3 in 10 adults reported using at least one health app, 16% reported using them in the past, while a whopping 56% said that they haven’t yet utilized this technology.

Although these apps, which would fall under the umbrella term of telemedicine solutions, vary in their purpose, all of them aim to improve clinical outcomes and the general health of the population. To that end, we can see the difference in using these apps with specific health goals. Among the adults aged 50-80:

For younger people, the statistics are different. In 2022, there were 6.64 billion smartphone users, which means that roughly 83% of the population owns a smartphone. 77% of young adults (18-29) used their phones to look up health conditions, while 84 million people in the U.S. used healthcare apps. This means that roughly 30% of adult smartphone users rely on this technology to give them better information about their health.

We can correlate the discrepancy among app use with the generational difference in smartphone ownership. Adults under 55 are twice as likely to rely on this technology than their older counterparts, sitting at 25% and 12%, respectively.

Still, the statistics for 2020 show us that 1 in 5 adults have tried using fitness trackers and health apps. The use varied across gender, so 20% of men and 17% of women reported using an app to track their health statistics. The stats were reversed for fitness trackers, as 21% of women used them regularly, as opposed to 16% of men wearing them.

Age also plays a role in using this technology: people aged 18-34 are three times more likely than those 55 and older to use fitness trackers, at 28% and 10%, respectively.

As the case is with many technologies, healthcare mobile app use varies based on the socioeconomic factors of different groups. Of Americans living in households earning more than $100 000, 26% use an app, while 31% use a tracker. The use drops significantly for those making less than $40 000, where only 15% use the app, while 14% use a tracker.

Across ethnicities, we could see the disparity across different populations. The percentage of different people in the U.S. regularly relying on a mHealth app is as follows: 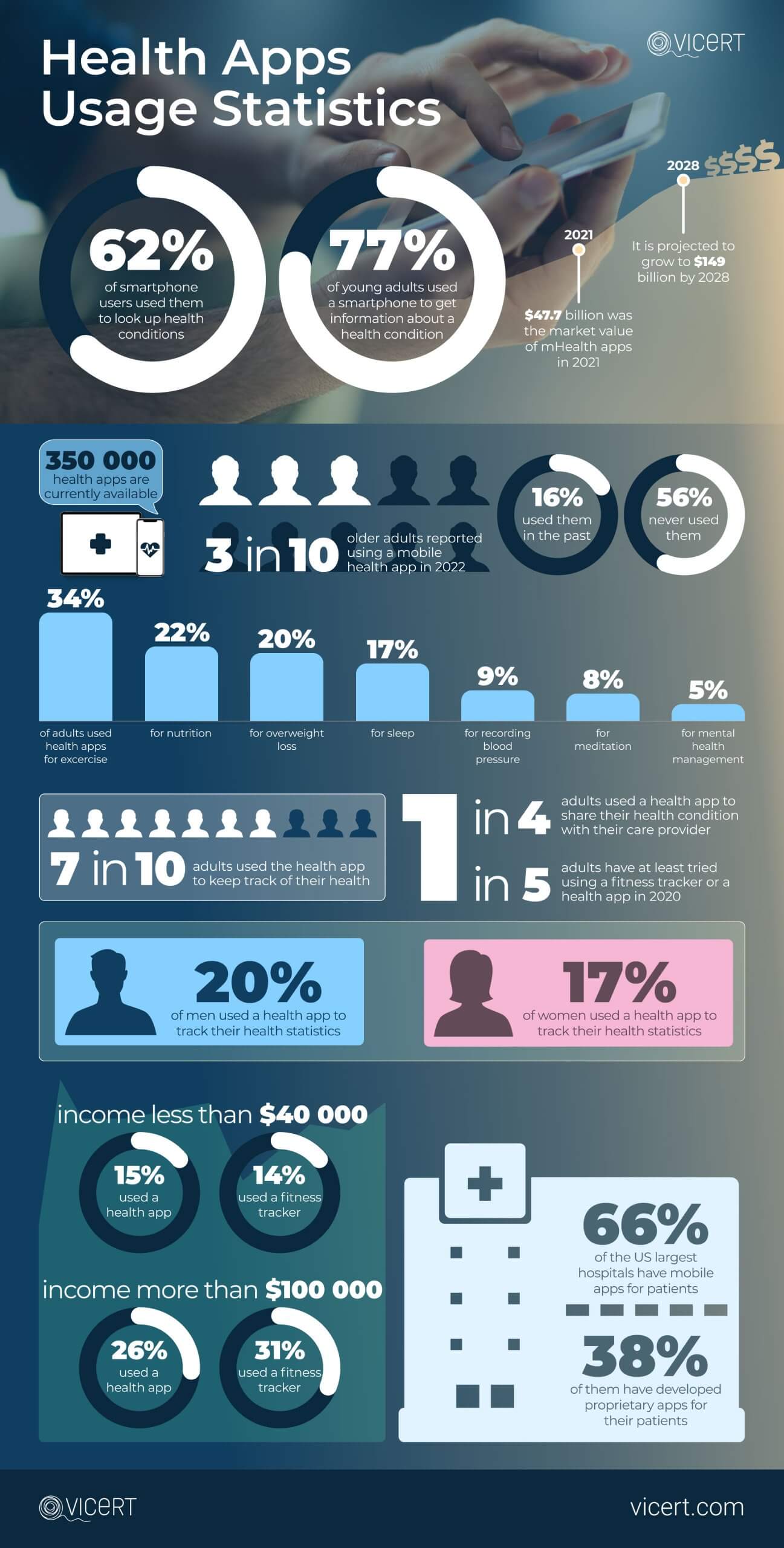 With decades of experience under our belt, Vicert can design the perfect digital solution to fit your exact business needs. From health apps to fitness trackers, we can help you develop a solution to integrate and improve your business processes and make healthcare delivery easier. Check out some of our solutions below and book a call with us to learn more!